Having been inspired by a fellow fan of Thornbridge (and Sheffield FC media man) Stuart James, I totted up how many different Bakewell brews I had supped, wrote them down and this figure recently slipped seamlessly past 100. To be honest, the last couple (Bamberg a 6% smoked bock and the 5.2% American Sister an APA) were not favourites of mine but there have been plenty of highlights, some recent, showing that Thornbridge live up to their latest legend 'Never Ordinary'.

In the early years (founded in 2005), Thornbridge forged their formidable reputation around pale hoppy brews and their recent Jaipur X was a fitting celebratory tribute to ten years of this. 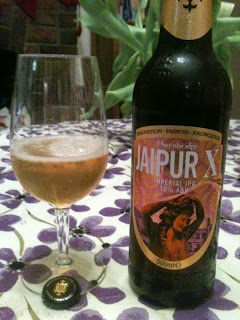 Rarely has a beer been so hyped and local outlets like Beer Central and Hop Hideout flogged their allocation in pre-orders alone. On-line it was a similar story. At 10% JX was a big hitter whilst more recently Bear State appeared in bottles and this 7% West Coast IPA is worth hunting down. Intense citrus and lasting bitterness with just a hint of malt sweetness. 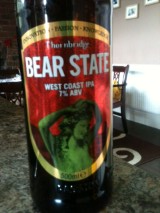 The previously blogged Cocoa Wonderland is a cracker. It really is a fantastic 6.8% treat best got from the cask but also now a part of the ever expanding bottled offerings. The rye IPA Desert Sessions was also a favourite of mine. Brewed in cahoots with the good folk at The Bath Hotel, at 5.7% DS was dangerously drinkable too. Puja is in similar vein albeit a Jasmine IPA and both of us have struggled not to sup too much of this rare 6.7%er. 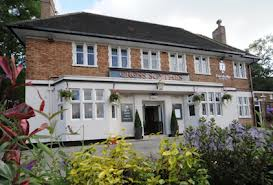 Lowlights? Misses? Well neither of us could manage Doppelgänger, or whatever it was called, but then we're not weisenbock type of boys. Ditto Ruin. Gin? Yes, but botanical beer.... Arghhh!

I'm sure there will be plenty more highlights ahead in my next 101 Thornbridge brews and this might well start next week in their exciting collaboration with Somerset stars Wild Beer Co and the eagerly anticipated Bakewell Sour. `Never Ordinary`, indeed! Cheers.
Posted by twobeergeeks at 01:34 No comments:

Having heard good things about The Beer Engine, it was nice to finally visit this Cemetery Road pub. It's tucked away near Waitrose and used to be known as Delaney's in a former life.
Manager Tom, formerly of Sheaf View, Thornbridge, The Ale House, etc, was not working on the Sunday night that we visited but he was mentioned amongst our carefully calculated nominations for a pub management dream team (it's looking like a five-a-side one with mebbe two subs, by the way. Send us your nominations on a postcard please).

The pub is nicely done out inside and has some tasty sounding tapas tackle on offer plus other stuff on matchdays. Oh, and a decent beer garden. Lots of talk about the light-coloured tables but they looked fine to us. Mind you, this is a beer blog not 60 Second Makeover `n` that.


First up we really enjoyed a couple of pints of Raw's Baby Ghost IPA and, uncharacteristically, we were tempted to stick with it. At 3.9%, this is a really effective `all day` hop fest. The Staveley stars are at their best with their Ghost series; can`t go far wrong. However, I'm glad we also then tried the Independence from Bristol Beer Factory. It's a lovely American pale brew with plenty of hop and citrus taste to it at 4.6%. Reyt up our street and both really quaffable pints. At this point we'd tend to maybe look keg-side as The Beer Engine usually has something interesting but the Bad Seed lager didn't appeal so we finished off with a couple of bottles. 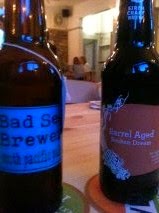 The Bad Seed South Pacific Pale was disappointing, a bit dull really even at 5.8%, so I shan't holiday in that vicinity this year. Angelsey will suffice, again. 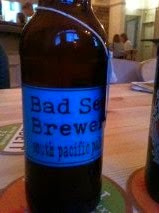 However, Siren's Broken Dreams, aged in sexy barrels, was a great nightcap. It really is a tough task to find a bad beer from the red-hot Reading brewers and it`s no surprise that RateBeer rated them tops recently. Don't recall what we paid for it but the price was right. Now, Play Your Cards Right and pop into the Beer Engine after a Supermarket Sweep at Waitrose, or similar. Sorry, it`s been a long week! Cheers. 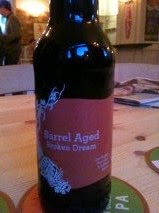